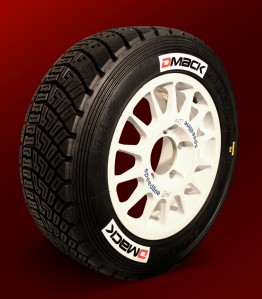 Chinese tyre maker DMACK, one of only two authorised suppliers to the 2011 FIA World Rally Championship, has completed testing and development of its gravel and snow competition tyres.

DMACK, who will join Michelin at the elite level of rallying, also released details of the full range of competition tyres on offer for next season’s WRC series.

Renowned British driver Mark Higgins headed the development and evolution of the tyres with over 2000 kilometres of testing of the DMG2 gravel tyre in Cyprus, Turkey, Estonia and Wales using both WRC and Group N rally cars.

The DMG2 has been nominated to the FIA in two compounds: the hard G2 for events such as Portugal and Greece and the medium G4 for rounds in Australia (Coffs Harbour), Argentina and GB. A soft G6 compound may be offered as a further option for cold and wet gravel events.

The DMG-ICE snow and ice tyre has been tested in Sweden and will be used on the season opener in the same country. The snow tyre incorporates an asymmetric design and can be used on either side of the car.

DMACK’s asphalt tyre, the DMT-RC, has undergone recent development in China at the hands of Higgins and its evolution is still ongoing. The asphalt tyre will be nominated in two compounds: the hard T5 and medium/soft T7. A soft T9 and wet-weather W1 tyre may also be offered if required.

DMACK is aiming to supply competitors in the Production and Super 2000 World Rally Championships along with general privateer competitors and those contesting one-off WRC events. In a bid to further reduce costs for competitors, DMACK is offering a series of financial incentives for both competitors and team members.

For all rounds of the 2011 World Rally Championship, any Class 2 (Super 2000) or Class 3 (Group N 4WD) competitor using DMACK tyres that takes overall victory in Class 2 or Class 3 will have half of their tyre bill for that event paid by DMACK.

“We are very much looking forward to starting in Sweden and to see DMACK line up beside global tyre manufacturer Michelin at the start of an exciting season for our brand and products,” said Dick Cormack, DMACK Tyres motorsport director.

“Not only have we completed an intense development programme to ensure our tyres are to the standard required by the world rally championship, but I’m delighted to release details of our management package and competitor incentives.”