Ganassi expands to four cars for 2011

Ganassi expands to four cars for 2011 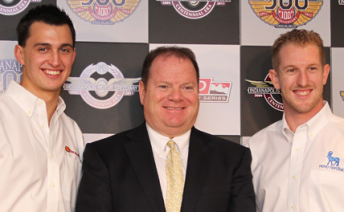 The #38 Service Central and #83 Novo Nordisk entries of Rahal and Kimball will be based in a separate Indiana workshop from the team’s Target entries.

The announcement sees 21 year old Rahal return to full-time driving after competing in a total of 12 races with four teams this season.

“This is – other than winning the Indy 500 or a championship – the best day a driver could have,” said Rahal of the deal.

“Last year was interesting – a lot of ups and downs. It makes you appreciate it when you get an opportunity like this.

“I have been working diligently, specifically over the past several months, to get into one of Chip’s IndyCars, and now that dream has become a reality with the help of Service Central and many others.”

Kimball, a graduate of the Formula 3 Euro Series, World Series by Renault and A1 Grand Prix, moves to IndyCar having spent the past two seasons in the Indy Lights class.

“It really is a dream come true,” said Kimball, 25, of moving to IndyCar.

“Working with Chip Ganassi and all of his crew, giving me the opportunity to learn from champions like Scott Dixon, Dario Franchitti and alongside Graham Rahal is another aspect of how I’m going to try to shorten the learning curve.

“I’m not underestimating the size of the task ahead of me and I’m really looking forward to using all the tools both within Chip Ganassi Racing and through my partnership with Novo Nordisk going forward.”