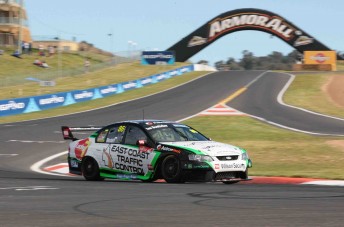 After rewriting the record books in Formula Ford as the youngest ever champion, the 18 year old will complete a full season in the Fujitsu Series with Miles Racing in 2011.

Mostert made his debut in the team’s ex-Paul Cruickshank Racing Falcon BF at the Bathurst round in October, and stunned series regulars by taking a sixth and a fourth place finish in the two races.

With the likes of Jack Perkins and Tim Blanchard set to contest the series next year, Mostert thinks that running at the front is not a realistic aim in the short term.

“I’m not really expecting to be up with the front runners straight away,” Mostert told Speedcafe.com.au.

“Some of the other guys have a lot of experience, and know how to drive the cars really quickly.

“My goal is to be able to start the year in the top ten, and then be on the pace by the end of the season.

“The series and cars are both brand new to me, so to get up there by the end of the year would be really satisfying.”

While a lack of experience  may slow him down initially, Mostert does not believe that the physical demands of a V8 Supercar are a major step up over a Formula Ford.

“I’ve definitely been working on building my training up a little bit more,” he said.

“But to be honest they’re not too physical to drive, except for the brake pressure.

“At Bathurst I didn’t even have a drink bottle or anything like that.”

Mostert will be joined at Miles Racing by 22 year old Ash Walsh, after the pair raced against each other in Formula Ford this year.

The two Fujitsu Series rookies expect to suit up for their first test day of 2011 in late January or early February, after the cars have received a ‘’birthday’ at the Miles Racing workshop