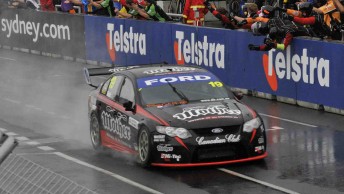 Jonathon Webb crosses the line to win in Sydney

Jonathon Webb’s Tekno Autosport team has firmed up two of its key positions in its newly-formed V8 Supercars outfit.

Webb, who won Saturday’s race at the Sydney Telstra 500, has split away from Dick Johnson Racing to run his own single-car team from a new base in Yatala, Queensland.

He will continue to run his ex-Triple Eight Falcon FG, with Geoff Slater again acting as his race engineer, while Andy McElrea will be Tekno’s inaugural team manager.

Slater was Webb’s engineer this season at DJR, and McElrea and Webb have worked together in the past at Paul Cruickshank Racing’s Carrera Cup team back in 2006.

Webb is now looking for Number 1 and 2 mechanics to join his squad, but told Speedcafe.com.au that he is pleased to have his main men sorted.

“To have someone of Geoff’s experience is great,” he said.

“We’ve gone from strength to strength this year. He’s great at strategy, he’s good at putting the car together and he’s great for our team.

“In the Middle East, I was sick as a dog and I hardly remember a lap of the race. We got a top 10 first time out there, and it was all thanks to his strategy. The same can be said for our win in Sydney.

“And Andy is coming over to look after our team for us. He’s got his current shop where he has his Porsches and MINIs. We’re going to use to start in his shop before we move into our new place. He is getting someone to manage his team to let him have more time to help us. We worked pretty well together in the past in Carrera Cup with Paul Cruickshank’s team.”

Webb hopes to be able to move into his own shop after the Middle East race in February.

He also confirmed that his team will stand on its own feet, working soley with Triple Eight Race Engineering’s technical base.

“We’re working all of our stuff through with Triple Eight, just like the Fiore team do and Cruickshank in the past,” he said.

“We’ll align ourselves technically with Roland, giving us the support that we need. The way they do their business is second to none and we’re really looking forward to the new year.”