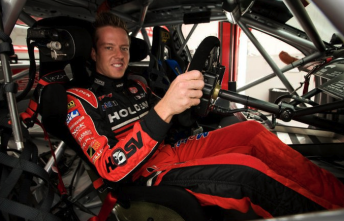 James Courtney says that only minor adjustments were needed to make him comfortable inside the Toll Holden Racing Team Commodore VE that he drove yesterday at Phillip Island in his first drive with the factory team.

As part of Toll HRT’s final ride day for the year, the new V8 Champion drove the Commodore for most of the day, taking passengers for rides while getting familiar with the team that he has committed to for the next three years.

Courtney said that he was immediately comfortable in his new surroundings.

“It went really well. Everyone was really welcoming and friendly,” he told Speedcafe.com.au. “It was only a ride day, so we couldn’t test anything, so it was more about familiarising myself with the car and all that.

“It was very helpful in that I could get a bit of a heads-up with seating position and adjusting little things so I was comfortable. It was really just that – getting comfortable in there before I hit the ground running next year.”

Courtney said that his first impressions of the Commodore – the first Holden V8 Supercar he has driven since 2005 – were encouraging.

“I was pretty impressed with the car. It did everything it was supposed to,” he said.

“It had some different characteristics. They are set-up quite differently to what I’m used to.

“I’ve obviously been watching HRT’s cars go around the track for a few years now, so it was interesting to be behind the wheel and experience it myself and put two-and-two together.

“I’ve got a good idea now of what we want and what we need. We’ll make some changes over the christmas break and we’ll see how we go next year.”

Joining Courtney at the Toll Holden Racing Team will be his championship-winning engineer Scott Sinclair who is following Courtney from DJR to HRT.

Courtney said that the opportunity for Sinclair is just as big as his chance.

“It’s an awesome opportunity for Scott and myself. We’re very familiar with each other, so both of us going to a new team will cut out a lot of the learning process. We’ll be relying on each other at times,” he said.

“It’s excellent that Scott has been able to come down with me and get the opportunity to work with a big organisation.”