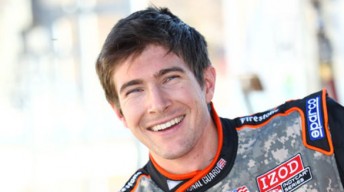 The number of North American drivers in the IndyCar Series is on the rise, with Panther Racing announcing that 22 year old J.R. Hildebrand will drive its National Guard Dallara next season.

Hildebrand won the 2009 Firestone Indy Lights Championship, before participating in Formula One’s Young Driver Test with Force India at the end of the year.

The Californian then made two IndyCar Series starts for Dreyer and Reindbold in 2010 – setting the fastest lap of the race at Infineon Raceway.

The team’s CEO, John Barnes, suggested that having an American driver was a good fit for sponsor The National Guard – a reserve military force for the United States.

“J.R. is an extremely impressive young man and he’s going to be a great fit for the National Guard and Panther Racing,” said Barnes.

“We took a very calculated and methodical approach to making this decision because anybody who represents the 350,000 soldiers in the National Guard has a tremendous responsibility both inside and outside the race car.”

Hildebrand said he is looking forward to all aspects of his 2011 schedule with Panther Racing.

“I’ve already got a small taste of all the programs I’ll be a part of through this sponsorship and I just couldn’t be more excited to get more involved in everything that goes along with this partnership,” he said.

“I’m certainly excited about this opportunity and I’m definitely looking forward to every piece of this program moving forward.”

After no North American drivers finished in the top six in the 2010 IndyCar Series points standings, the signing of Hildebrand is a clear boost for the series.

The 21 year old competed in the full IndyCar series in 2009 with Newman-Haas Racing, but was forced to run just ten races, with four different teams, in 2010 after sponsor McDonalds pulled its support.

It is anticipated that Rahal will drive a ‘satellite’ Ganassi entry, housed separately from its Target-backed squad.

The addition of Hildebrand and Rahal to the series brings the total number of full-time American IndyCar drivers to five – with Danica Patrick, Marco Andretti and Ryan Hunter Reay already confirmed starters.