The 2011 IRWIN Racing livery that Alex Davison will compete with

IRWIN Racing is one of the first teams to show its 2011 war paint, unveiling its new livery for next year’s V8 Supercars Championship.

The new IRWIN design features a sharper look, incorporating silver lines on the doors, front bar and side skirts.

Alex Davison, driver of the #4 IRWIN Tools Ford is pleased with the look of his Falcon.

“It’s good to get it all locked away so everyone can see what we will look like, it tells everyone that we are serious about next season and ready to go. 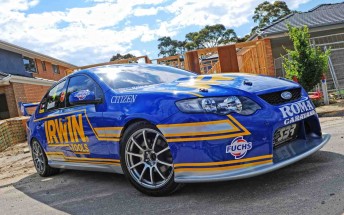 Another angle of the IRWIN Tools Falcon

“We are all happy to put 2010 behind us and take what we’ve learned into next year.

“We took some really positive points away from Sydney, so I am going into next year full of confidence.”

After a frustrating season where he finished 21st in the title, Davison is in the last year of his three-year deal with Stone Brothers Racing. Davison wants to put 2010 behind him and launch into the new year with a renewed look and a renewed focus.

“It’s our third year working together. We didn’t have the success we wanted this year but we know we have the vital ingredients to ensure success. Based on what we have learned in recent weeks we know we are capable of great results.

“Shane (van Gisbergen) and Alex (Davison) ran on the same set up and it worked for Alex for the first time. They were able to help one another, there was nothing between them.

“The IRWIN Ford reacted well to change. The guys didn’t have to make big changes; it was more fine tuning to a solid base (set-up).

“We didn’t get the results at Sydney, but over and above the lack of results we had a solid weekend with the set-up of the car and it performed well, which is a really important step forward for everyone associated with the IRWIN side of the garage.”