Centaur Racing has appointed a new lead engineer for the 2011 V8 Supercars Championship as the single-car team works towards an independent future.

Long-time Greg Murphy engineer Adam DeBorre has signed with the Victorian-based team and will start with the squad in the new year.

In the past, Centaur Racing has utilised a Walkinshaw Racing engineer to perform its race-day servicing, but the team has now decided that the best way forward is to employ its own engineer. 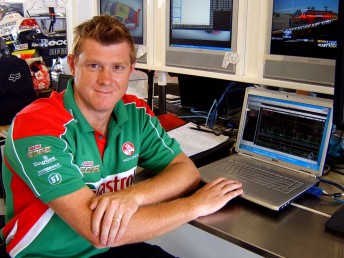 D’Alberto said that taking on his own engineer is the best way forward.

“It makes sense to us to employ our own engineer, especially with V8’s Car of the Future coming onboard in the coming years,” he told Speedcafe.com.au.

“We need to take control of where we’re taking our team. We can’t afford to stand still. We’ve always been serious about our racing, but now we want to do everything we can to get to the front.”

DeBorre is a highly-experienced race engineer. After forging an early career in Europe, DeBorre entered V8 Supercars at Garry Rogers Motorsport in 2006 where he worked with Lee Holdsworth.

In 2007 and 2008, he engineered Jason Richards’ car at Tasman Motorsport before stepping across to work with Murphy in 2009. He followed Murphy to Paul Morris Motorsport this year.

DeBorre said that he is looking forward to his new role.

“When I found out Centaur Racing was looking for an engineer I really wanted to get on board and work with Tony and the team,” said DeBorre.

“These guys are dedicated, they are very focused on progressing and that’s what I want to be a part of.

“I’m looking forward to next season. We have some big plans in place and Tony is a quality driver. I’ve got no doubt we’ll work well together.”