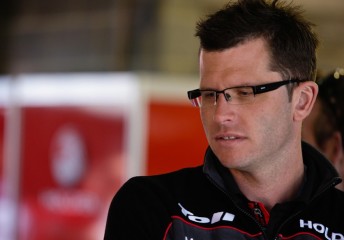 Garth Tander says he is looking forward to driving alongside James Courtney at the Toll Holden Racing Team next season.

Tander will suit up for his fourth season in red colours next year, after graduating from the sister HSV Dealer Team (now known as Walkinshaw Racing), which he joined in 2005.

The Western Australian-born driver took fifth in the 2010 championship standings – some 17 places ahead of outgoing team-mate Will Davison.

At the Fisherman’s Bend announcement of Courtney’s signing today, Tander told assembled media including Speedcafe.com.au that he is looking forward to working with his new team-mate.

“It’s obviously very exciting to have James Courtney in the team,” he said.

“He’s had a really great year this year, and really come of age I guess, so to have James now join HRT as the champion is really exciting for all of us in the team.

“It’s going to be an exciting year this year, and one that we’re really looking forward to.

“I’m looking forward to working with James, and making sure that HRT is at the front, finishing first and second.”

The 33 year old likened teaming up with Courtney to the relationship he had with Rick Kelly at the Toll HSVDT in 2007, when Tander took his V8 Supercar Championship Series crown.

“All throughout my career I’ve had very good team-mates,” said Tander.

“In 2007 I was team-mates with Rick Kelly who was the reigning champion.

“We drove each other really really hard and had a very successful season. I don’t see any difference here.”