Doric makes switch to FPR for 2011

Doric makes switch to FPR for 2011 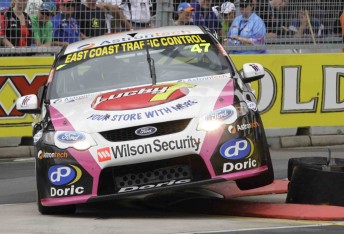 Ford Performance Racing has secured a new sponsor in Doric for the 2011 V8 Supercars Championship.

Doric has a long association with V8 Supercars, starting back in 2003 in the Fujitsu V8 Series with Phillip Scifleet before progressing to Paul Cruickshank Racing’s various V8 programs.

This year, the hardware manufacturer has supported Tim Slade’s Stone Brothers Racing-prepared Wilson Security Racing team but will make the move to the factory Ford team for 2011.

Doric’s logos will be have prominent display on the team’s #6 entry, to be driven by Will Davison, who will be announced in the new year. The Trading Post FPR Falcon as it was unveiled in Sydney

The #6 entry will carry new major backing from Trading Post which was unveiled on the week of the Sydney Telstra 500 recently.

Doric’s managing director Perry Long said that after starting at the bottom of the V8 pit, he is excited to be supporting one of the leading teams.

“We’re looking forward to being involved in such a professional operation. It’s going to be an exciting year with the #6 driver. It will be an interesting exercise,” Perry told Speedcafe.com.au.

“The Stones have done a tremendous job this year, especially compared to where we came from, and I think this progress will continue with our next move.

“Tim Slade has done a great job for us. Fabian Coulthard did a good job last year, but both of those guys have been new to V8s. Now we’re going in with an experienced combination, which is going to be a different experience to being at the back of the field for all those years.”

Long says that the benefits of Doric’s investment in V8 Supercars continues to be justified.

“We measure the benefits of being involved with V8 Supercars, and it very much beneficial to our business,” he said.

“Our association with racing through the V8s has proven to build and maintain good relationships with our customers. We’re very happy to continue that with FPR.”