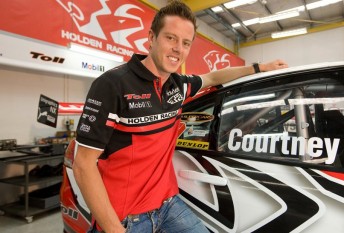 James Courtney says that defending his V8 Supercar Championship Series crown in 2011 is not an unrealistic aim.

At the announcement of his three-year deal with the Toll Holden Racing Team, Courtney revealed that he would relocate his family from the Gold Coast to Melbourne in the new year – signifying his commitment to the team.

After winning the 2010 championship with Dick Johnson Racing, the 30 year old said that his move to the HRT is a refreshing change.

“As a sportsman you have to continually challenge yourself,” he said.

“We’ve ticked the box with the other side, and the next thing to do is to come here and do the same thing.

“It really wasn’t too much of a hard decision (to change teams).”

Courtney also revealed that his family have been long-time Holden owners.

“As much as I couldn’t say it before, my family have always owned Commodores, and my dad would always get asked ‘what do you drive a Holden for when your son races for the other side?’ So it’s a special feeling (signing with Holden),” he said.

While conceding that it may take some time to adjust to the HRT VE, Courtney was bullish about winning the 2011 championship.

“For sure it’s going to be a tough first half of the year for me getting to know the cars and things like that, but it’s not unrealistic (to win the championship).

“I’m here to win the championship in my first year. We’ve got a little bit of work to do, but I don’t think it’s unrealistic at all. We’re not here to make up the numbers, we’re here to win.”

If Courtney does win the 2011 championship, it will be the first time a driver/team combination has lifted the crown in their first year together since the V8 Supercar era began in 1993.