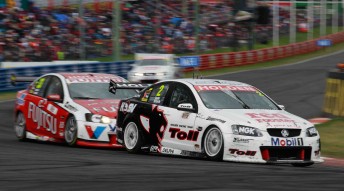 The Toll Holden Racing Team has made a statement after the passing of its founder Tom Walkinshaw.

Walkinshaw passed away overnight after a long battle with cancer. He was 64 years old. CLICK HERE for more …

“As we all know, Tom was very passionate about motor racing and he achieved much success as a driver and team owner in his lifetime,” said Wilson.

“Those who know Tom know a tremendous competitor. But having worked for him for over 20 years I also know him as someone with amazing entrepreneurial spirit and someone with real insight into this business.

“He will be sadly missed, but we owe it to him to continue the success we have enjoyed under his watchful eye.”

“On behalf of the men and women at Holden, I’d like to extend our deepest sympathies to Tom’s family, friends and co-workers across the world,” Devereux said.

“For more than 20 years Tom’s pursuit of excellence helped forge our brand’s reputation as a performance leader both on and off the track through the creation of Holden Special Vehicles and the Holden Racing Team.

“His contribution not only to Holden, but the automotive industry is legendary and will never be forgotten.”

Walkinshaw is survived by his wife Martine and their two sons Ryan and Sean.