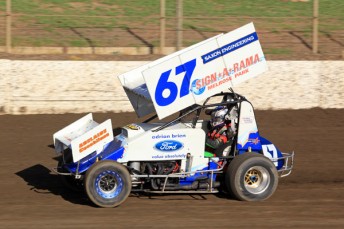 V8 Supercar driver Tim Slade had his first taste of Sprintcar action during round two of the All Stars Series at Murray Bridge in South Australia on the weekend – and he’s hungry for more.

Driving the Adrian Brien Ford-backed Cool chassis owned by Ray Bartlett, Slade showed potential throughout the night in his ‘baptism of fire’ on the dirt track.

“Unlike V8s where you get two hours practice, I had about 20 or 30 laps on Thursday night to get used to the car and come race night it was all go,” said Slade.

“I had to start off the back in my heat races and the B Main as I’d never raced a Sprintcar before but overall I was pretty pleased with my efforts.

“I made a up a couple of spots in my heat races and was moving forward in the B Main before it was cut short as there was inclement weather coming and there had been a couple of red flag stoppages.  At one stage I was up to about ninth, and the top six transferred, with another few laps I think it would have been interesting.”

While competitors in the All Stars Series use 360ci engines rather than the 410ci used in open competition, Slade indicated the quality of the drivers and equipment was impressive – as was the number of competitors.

“There are some good guys running in the series and in good gear too, there were something like 34 drivers there,” said Slade.

Slade is already eyeing off the next challenge in his Sprintcar journey – a start in the World Series Sprintcars Championship round at Adelaide’s Speedway City on December 26 followed the next night by the round at nearby Murray Bridge.

“I’m hungry for more.  I didn’t feel out of my depth at all and had a blast,” said Slade.

“We’ll be doing the next two rounds of World Series at Speedway City and Murray Bridge with the 360 engine in, purely to get laps more than anything else then we’ll look to the next round of the All Stars Series.

“It looks like throughout January I’ll be racing almost every weekend – it’s going to be a lot of fun.”