James Moffat is poised to replace James Courtney at Dick Johnson Racing in 2011.

Moffat is believed to have agreed to a deal with the championship-winning Jim Beam backed team for the 2011 V8 Supercars Championship.

If the deal for Moffat to drive with ‘The Team’ goes ahead, he will partner Steve Johnson who returns to DJR for a 12th consecutive season. 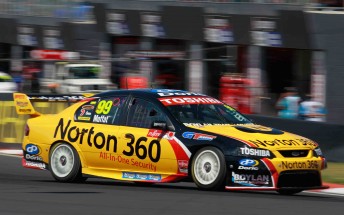 Moffat has competed in the Fujitsu V8 Series for the past two years, finishing second and third, backed by loyal partner Norton 360. Moffat also made his Championship debut this year, driving with Steve Richards in the #6 Ford Performance Racing Falcon.

According to Moffat’s management, an announcement on his driving future is not due until the new year.

Moffat told Speedcafe.com.au; “We’re still working away on things, so there’s nothing to confirm at this point.”

Moffat’s expected deal at DJR coincides with confirmation by DJR today that Courtney will not continue with the team in 2011. Courtney will soon announce that he will drive with the Toll Holden Racing Team in next year.

Team owner Johnson said that the he was disappointed to lose the services of the 2010 V8 Supercar Series Champion, but wished Courtney the best for the future.

“It’s a shame to see the winning combination broken up, however James has decided that moving on is the best thing for him and his family and I respect that decision,” Johnson said.

“I’ve always had a great relationship with James and I’m very proud of what he has achieved with us.

“The history books will show that James Courtney won the 2010 Drivers Championship with Jim Beam Racing.

“He’s added something wonderful to The Team’s history and for that we will always hold him in the highest regard.”