Tim Leahey in his Formula Holden at Oran Park

Tim Leahey was one of the V8 Championship’s leading go-to drivers when it came to endurance races. Leahey raced the Bathurst 1000 and Queensland/Sandown 500s at some of the series’ most notable teams. Briggs Motorsport, Garry Rogers Motorsport, Paul Weel, Brad Jones and Lansvale Racing and Kelly Motorsport all had Leahey on their books.

Prior to V8 Supercars, Leahey did what most drivers before him have done; he started in go-karts and progressed through Formula Ford. 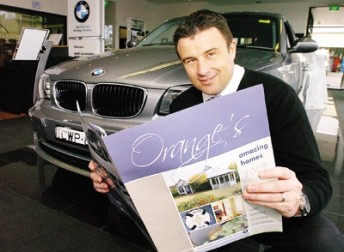 Tim Leahey is a car dealer principal in the Bathurst region

“I’ve been interested in motorsport since I was a kid,” Leahey explained to Speedcafe.com.au

“Racing turned into a bit of a drug and it just developed from there.”

Leahey started racing in various classes of go-kart, winning the South Pacific F100 Kart Championship, and then moved on to Formula Ford. In the very early days he had little known mechanic by the name of Garth Tander working on his car.

“I was racing Formula Ford in 1998, Garth Tander didn’t have a drive early in the year so he helped me as a mechanic in my first four races,” said Leahey. 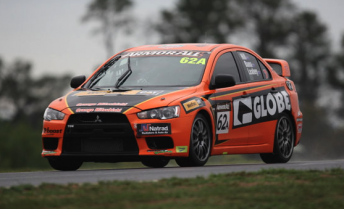 “It was good fun. Garth and I are still mates now.

“We weren’t quite as competitive as the Spectrum, but we came third.

“It was a really great year; the only year I really had the budget to do it properly.”

In 1999 Leahey decided to move to Perth to try his hand at V8 Supercars.

“I moved to Perth in 1999 when the CAT Racing thing started, which in hindsight wasn’t the best move,” said Leahey.

“I probably should have done another year of Formula Ford, but I had a good time, did some V8 testing and mainly worked in the team before it was sold to (John) Briggs.”

Leahey raced with Briggs in the 1999 endurance rounds, failing to finish both races and then turned his attention to Formula Holden in 2000.

“I did a couple of races in a Formula Holden, then I think it was 2000 that I did the full season,” said Leahey.

“The car was pretty fast, just unreliable. We won a few race; got lots of poles and had a few fastest laps.”

It was during 2000 that Leahey raced at Oran Park Raceway where he recorded the outright fastest lap record for the track. It is a record that will never be broken, thanks to the circuit’s closure earlier this year.

“(laughing) It’s not the ideal claim to fame, is it?” said Leahey.

“Oran Park was the first place that I raced a Formula Ford at.

“It was a great track and it is a shame that it has gone, but racing a Formula Holden around there, down the straight into turn one and the kink, it was such a thrill, it was good fun.”

Leahey also raced Volkswagens, had several top 10s in V8 endurance rounds, came 3rd in his class in the 2001 GT-Performance Championship and fronted up for the first ever Carrera Cup season, in 2003.

“Jim Richards was in it, he won the inaugural season, there was Marcus Marshall, myself, and a few others and it was great.

“I did that season at Greg Murphy Racing and it was a good year. We were competitive, but because it was the first year there was a fair bit of learning taking place.

“Third in the series was a very good result.”

When looking back at his career, his favourite memories are based around that 1998 Formula Ford season, but he has fond memories of racing V8s at Bathurst in 2000 and 2004

“Greg Ritter and I raced with GRM (Garry Rogers Motorsport)at Bathurst in 2000 when Tander and (Jason) Bargwanna won, and the year that Kmart won, in 2004, I was with Steve Owen, they were good years,” said  Leahey.

“2004 was better because we got a really good result, we were eighth.

“I’m a people person and have made a lot of friends I motorsport. Working alongside HRT and the Kellys, I had a lot of fun.  They were teams filled with a lot of good guys, they were good company.

“As far as favourite cars go the 2000 Formula Holden was the best and the Raynard, when we got it right, was fantastic.”

While Leahey is focusing on his business interests away from motorsport, he still keeps a toe in the water, focusing on 12 hour races.

“These days the 12 hour races like Sepang and the Abu Dhabi endurance event are more my cup of tea,” said Leahey.

“You only need to commit to a few weekends a year, you get a lot of miles, you do good long practice sessions and you get to race during the day and at night.

“My next race is the Bathurst 12 hour with John Bowe and Peter Edwards. This is my next focus and I’m looking forward to it.”

Despite never making it as a full-time V8 driver Leahey was mature enough to know that he would struggle to make a serious career out of it, so he turned his attention to the family business.

“By the time I was 26 or 27 I knew I was never going to be a full time driver and get paid to race, I decided it was time to get real,” said Leahey.

“I’ve got no chip on my shoulder, yeah I could still be doing endurance races or be a driver trainer, but I choose to come back and sink the teeth into the family business.

“It’s grown a lot in five years and I like to think I had a lot to do with it. My parents can retire and I can look after them and grow the business.

“I still enjoy watching motorsport but we have three separate car dealerships to look after. Once you go motor racing you become a competitive person, I’m just as competitive in business, you still want good results.”

Since leaving the sport Leahey has turned all of his attention to his family’s car dealerships near Bathurst.

“We have three dealerships, including one in Cowra that I run and another in Orange, which is my baby,” said Leahey.

“This keeps me occupied and this is why I struggle to get away to go racing these days.

“It’s pretty cool that I can still do the odd 12 hour race, which I’ll continue to do for as long as I can manage.”