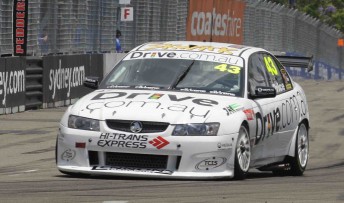 Jay Motorsports is planning to expand to two cars for the 2011 Fujitsu V8 Supercar Series.

Earlier, rookie Nick Percat had competed in the opening four rounds with the team, and ran as high as second in points before switching to a Bundaberg Red Racing VE, prepared by Walkinshaw Racing.

Rod Salmon was then installed for Bathurst, but withdrew after a sizeable shunt at the top of the mountain in practice.

According to Jay Motorsports team principal Keith Rennie, adding a Walkinshaw VE to its stable next season is the aim.

“It is the next step,” he told Speedcafe.com.au.

“At the moment we’re talking to drivers – two news guys to the category that are very keen.

“We’d be sticking with the Walkinshaw package – we’re very happy with the association we have with them.

“We’re probably one of the longest standing DVS teams that have been with them – this is now our fourth year with them.”

While unwilling to name the possible pilots, Rennie did confirm that the team will continue its young driver policy – having previously run the likes of Jay Verdnik, Chris Alajajian, Price and Percat

“It’s something that we pride ourselves on, bringing new drivers to the circuit that haven’t driven these cars before,” said Rennie.

“They’re difficult cars – they’re not nice to drive. They’re like a very good car on a tyre with not a lot of grip, so you basically have to grab it by the scruff of the neck.

“I like bringing the young guys on, getting them up to speed quickly – that’s our team philosophy.”

The team also hope to have sponsor Drive.com.au onboard for 2011, having introduced the FairFax website to the sport at the Sydney event.

“They’ve come on board for this round with a view to carry on next year,” said Rennie.

“They’re gauging the response of what they get. They’re very good at that.

“They’re very excited about it, they think they can market it quite well.

“They like our concept of bringing young drivers on as well. It’s good to have them on board.”