International drivers ruled out of Bathurst

International drivers ruled out of Bathurst 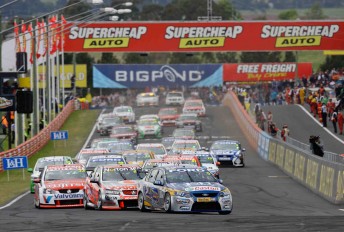 International V8 drivers selected to compete at the Gold Coast 600 will not be allowed to race in the two traditional endurance races at Phillip Island and Bathurst next year.

The new rule effectively means the Bathurst 1000 could be an event for locals-only.

At a V8 Supercars Australia board meeting yesterday, the board ruled that the ‘Primary Driver Rule’ as applied this year for the endurance rounds will again be used in the 2011. The rule prohibits two full-time V8 Supercars drivers teaming up in the same car.

However, international stars racing on at Surfers Paradise will not be accepted into the L&H 500 Phillip Island and the Supercheap Auto Bathurst 1000.

This year, David Brabham and Ryan Briscoe competed at both Bathurst and as internationals on the Gold Coast. The new rule will prevent these types of drivers racing at Phillip Island and Bathurst, if chosen to race on the Gold Coast.

The last international driver to win at Bathurst was Rickard Rydell in the 1998 Bathurst 1000 for Super Touring Cars.

“If the international drivers were given the choice, they’d probably chose to do Bathurst over the Gold Coast anyway,” he told Speedcafe.com.au.

“But we saw some extremely talented and well-known drivers like Jacques Villeneuve, Helio Castroneves and Dario Franchitti come to the Gold Coast. None of those guys did Phillip Island and Bathurst, and by having them only at the Gold Coast made it a lot more unique.

“The idea for the Gold Coast race is that we see all these faces that we haven’t seen before.”

It is expected that all 28 V8 Supercars at the Gold Coast next year will be co-driven by international drivers. This year, only 18 international stars teamed up with the regular V8 drivers. The other co-driver slots were filled by local co-drivers.

The Gold Coast event will also see Dunlop’s Sprint tyres used, with 10 sets allocated to each entry, as opposed to the harder Control tyre that has been used there in the past.