Cowin: Top Fuel toughest it has ever been

Cowin: Top Fuel toughest it has ever been 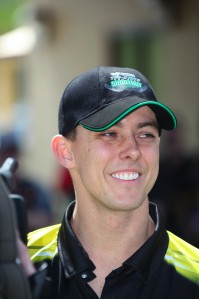 Comeback kid Andrew Cowin has rated the current crop of Australian Top Fuel racers as the ‘toughest’ as he and father Graeme prepare for Willowbank Raceway’s New Year Series, round three of the 09/10 ANDRA Pro Series.

After a hiatus, the Cowin’s are mounting a full season assault and while the comeback got off to a bumpy start with a shock first round loss at the Nationals in Sydney, it has since been on the upswing, with the round two event win in October seeing him positioned second in the Top Fuel championship chase behind likeable Victorian Darren Morgan.

Just weeks later, he also set the first Australian Nostalgia Nitro Funny Car five second pass in a separate event, showing he is lacking none of the talent he illustrated at the beginning of his career when in 1999 Cowin became the world’s quickest and fastest teenager at the time, and the youngest US Nationals finalist in history at age 19, going on to appear in multiple NHRA finals.

“We tested before the start of the season and ran a 4.59 second time which was great, and then with the event win in October we moved up to second in the points, and we hope to keep progressing forward,” said Cowin.

“Top Fuel racing in Australia is the toughest it has ever been at the moment, the level of competition and the cars is massive and you have got to be on your game.

“I find the first few rounds aren’t that nerve wracking but when you come to the final, that is when you are like a Meerkat with your ears popped up, everyone has stayed around to watch the final two cars of the event and the pressure is on. 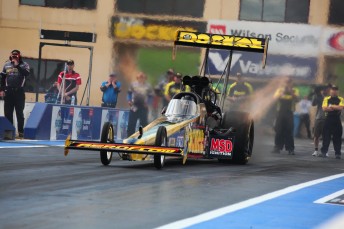 Cowin in action at the Nationals (credit - blacktrack.com.au)

“We are really looking forward to getting up to Willowbank Raceway for the New Year Series, the fans are the best, the place is full of really good people, the weather is normally really good and the track is stellar.

“The last time I raced there was in 2002 and I ran the first ‘4.7’ second pass, and it was the first ever 500 kilometre per hour Top Fuel run as well and my first ever win.

“To top it off, my win came from beating Jim Read in the final which was great, so I am certainly looking forward to heading back to Willowbank.”

Where Cowin faltered at the Nationals, Morgan shined, taking the event win.  That result, combined with his October semi-final appearance, sees him positioned on the top of the points table heading into the New Year.

ANDRA Pro Series brackets Top Fuel and Top Alcohol will take to the Ipswich quarter-mile over January 2 and 3, before Top Doorslammer and Pro Stock are joined by the fire-throwing Nitro Funny Cars on January 14 and 15.