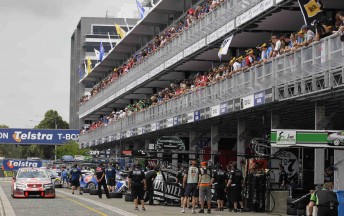 The 2011 V8 Supercar pitlane garage order has officially been set.

Team garages have again be allocated according to the final 2010 Teams’ Championship finishing order – with adjustments made for those running either less or more than two cars.

After wrapping up the 2010 Teams’ Championship at the penultimate event at Sandown, TeamVodafone will take the coveted first and second pit bays (located at the exit of pitlane).

Jim Beam Racing will be situated alongside, as they will no longer be grouped with Jonathon Webb’s Tekno Autosports entry (CLICK HERE for previous story).

With Jack Daniel’s pair Rick and Todd Kelly needing to be grouped with the Rock Energy and Stratco backed Kelly Racing entries, the third cars from Ford Performance Racing and Stone Brothers Racing will again share a pit boom.

Unlike in 2010, Walkinshaw Racing’s Bundaberg team will be pitted alongside its sister Toll Holden Racing Team entries, with Fabian Coulthard set to share a pit boom with Karl Reindler’s Fair Dinkum Sheds Commodore.

Below is the 2011 garage allocation as issued by V8 Supercars