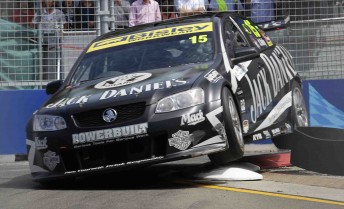 Rick Kelly will hand this car to David Reynolds for 2011. Kelly will get a new car for the new year

Rick Kelly will debut a brand-new Holden Commodore next week at Winton Motor Raceway during a test day in preparation for the 2011 V8 Supercars Championship.

Kelly’s current chassis which he has used since the start of Kelly Racing in 2009, will be handed down new recruit David Reynolds who was announced today as the driver of the #16 Stratco Racing Commodore VE, replacing West Australian Tony Ricciardello. CLICK HERE for news coverage. 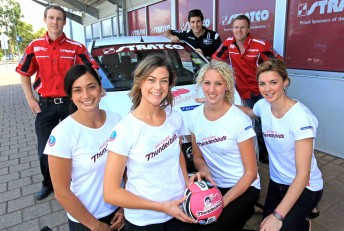 David Reynolds (left back), joined by the Adelaide Thunderbirds netball team, at the announcement of his new deal with Kelly Racing today

Reynolds will step into chassis PE048, driven by Kelly to his third place in Saturday’s race at last weekend’s Sydney Telstra 500.

The Albury-born driver will have his first test of the car next week at Winton Motor Raceway, where Kelly will also debut his brand new chassis.

Kelly told Speedcafe.com.au that it is nice to get the car onto the track before the season proper.

“The car has been ready for sometime, but we decided to leave its debut until this test,” he told Speedcafe.com.au.

“With the busy end to the year, this way made the most sense for us.”

It will be Reynolds second full season in a V8 Supercar, having competed with Walkinshaw Racing in 2009 as the Bundaberg Red Racing driver.

Reynolds admits that he has worked hard during 2010 to ensure he returns to V8 Supercars as a better driver – both mentally and physically.

“I feel that I’m better mentally now that I have had a year off to think about it,” said Reynolds.

“Everything happens so quickly in your first season in the main game. The races are longer than you’re used to and as a young driver you can be burnt out by mid-year.

“I have really concentrated on my fitness this year so that I’m stronger for 2011. I’m not racing in New Zealand this summer so that I can concentrate completely on our plans for 2011 with the Stratco Commodore.

“I’m also looking forward to getting to know everyone at Stratco and working with them. The day today with the girls from the Adelaide Thunderbirds has been very fun so we are off to a good start.”