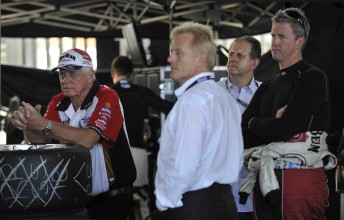 Internationally renowned motor racing manager Didier Debae had his first taste of V8 Supercar racing in over three years when he visited the Sydney Telstra 500 at the weekend.

The Belgian, currently living in New Zealand, has previously worked with the likes of Tom Walkinshaw Racing and Williams Touring Car Engineering in the European and British Touring Car Championships respectively.

Debae also spent time working as the Sporting Director for Opel’s DTM program, and has more recently been involved with the Formula Master category.

Having last seen the V8 Supercar Championship Series in 2007, Debae said he was impressed with the way it has developed since that time.

“I think that everything, not just the cars, but everything has developed around the paddock,” he told Speedcafe.com.au

“The merchandising and the number of families with young children – obviously the interest is great.

“I know that the television and attendance is not as big as it was in the past, but I think that the recession has something to do with the spectators not coming to the track. It’s a lot of money to spend on a family day out.”

With DJR’s team manager Adrian Burgess leaving for TeamVodafone in 2011, Debae has emerged as a possible replacement, and says that the situation will be resolved within the next few weeks.

“All the problems that Dick has had in the past few months, obviously they’ve got them sorted out and need a couple of weeks to make a decision,” he said.

“It (the team) is a good set-up. They look very good in the paddock and in the pits, and obviously on the track they’re doing an excellent job.

“But there’s always room for improvement.”