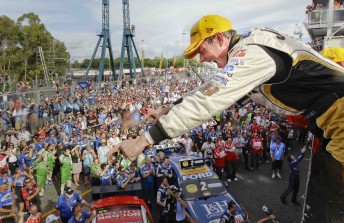 James Courtney celebrates on the podium in Sydney

Formal festivities at the V8 Supercar Gala Awards dinner were completed last night with all 16 awards handed out.

Courtney also received the coveted Barry Sheene Medal for being the ‘best and fairest’ V8 Supercar driver of the season.

The new champ says that it was a good battle with TeamVodafone’s Jamie Whincup all season long.

“It’s a great feeling to finally be champion after such a long season,” he said.

“We started back in February, and since then so much has happened on and off the track. I’m just happy to come out the other end with the most points. Jamie (Whincup) and I have both had our ‘ups and downs’. He led the early part of the championship, then I got to the front and it’s been a good battle.

“Our team put in a big effort to win this thing, and I’m very grateful to them and our sponsors and supporters.”

See below for a full list of the award winners.