More Superbikes with Supercars in 2011

More Superbikes with Supercars in 2011 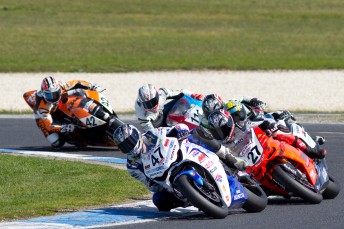 Australian Superbikes will appear three times with Supercars in 2011

After holding two events as ‘2+4’ at Phillip Island and Symmons Plains in 2010. Symmons Plains remains on the schedule with additional events being Queensland Raceway and Perth’s Barbagallo Raceway. After a number of years away from WA the Superbikes, like the V8 Supercars, will make a welcome return in 2011.

In all eight ASBK rounds will be contested with the season getting underway on a world stage in February. Phillip Island will host the traditional opening round alongside the might of the World Superbike Championship from February 25-27.

The championship will culminate back at ‘The Island’ in mid November.

“We are pleased to announce the 2011 calendar and in doing so welcome Perth’s Barbagallo Raceway back to the championship, a move we’re sure will excite riders and fans based in Western Australia,” said Hutchinson.

“The expansion of our partnership with V8 Supercars to three rounds is another significant step, and one that will result in increased exposure for riders, teams and their sponsors.

“Standalone rounds in four separate states strengthens our commitment to bringing Australia’s best riders to as many trackside fans as possible.

“We’re also looking forward to building on the momentum of our television partnership with Fox Sports and its dedicated motorsports channel, Speed TV.”

The 2011 Viking Group Australian Superbike Championship calendar is as follows: