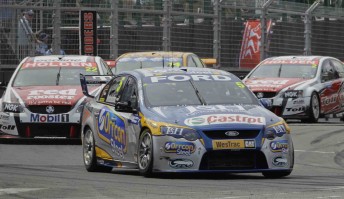 Team principal Tim Edwards confirmed that at least two new cars will be built of the 2011 season. He said that they will be introduced after the opening round at Abu Dhabi in February.

“We won’t start the season with them. It’s a bit early to do that. We’re just working through it all at the moment. We’ve changed so much of the car this year anyway.

“So, yes, we are looking at another one, maybe two chassis for the year, but the cars that we’ve got now are the ones that will be going to Abu Dhabi.”

One of the new FPR Falcons was earmarked for its still-born fourth entry. The team had also began a large recruitment drive to combat the extra anticipated workload.

Edwards said that he won’t be recruiting anymore staff, but is happy with the level staffers he has now for his three-car team.

“We’re just focused on the future,” he said.

“We’ll take three competitive cars into next year, and we’re all pretty excited about it. We’re not looking backwards, we’re looking forward. Yes, we were going to have a four-car super team – instead we’ll have a three-car super team.”

Edwards also confirmed that four cars is still on his future plans for the factory Ford outfit, even though he couldn’t get the deal across the line this time.

“When the moons and planets align, we’ll do it,” he said.

“We got close. We got three-quarters of the universe to align this time, but one quarter didn’t align. At some point, we’ll do it.

“The positive is that we’ve made a concerted effort to boost some of the infrastructure in the business which will help us to run three cars, and when we eventually run four cars everything is there to do it.

Orrcon Steel FPR driver Mark Winterbottom finished third in this year’s title, while team-mates Paul Dumbrell and Steve Richards finished in ninth and 15th respectively. Richards has now left the team, set to be replaced by Will Davison.

FPR entered a Fujitsu V8 Series car for James Moffat this year, however, that program has concluded.