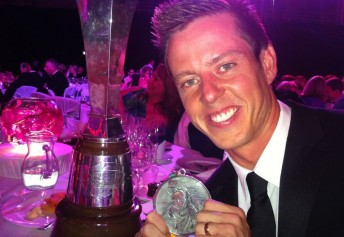 Named in honour of former motorcycle great and V8 Supercar commentator, the late Barry Sheene, the medal is awarded annually to a V8 Supercar driver based on the qualities of sportsmanship and personality.

The winner is selected by an expert panel, with Marcos Ambrose, Craig Lowndes, Jamie Whincup and Will Davison the only previous winners since the award was introduced in 2003 – the year of Sheene’s passing.

After Courtney secured his first V8 Supercar Championship title on the streets of Sydney Olympic Park on Sunday, winning the Barry Sheene Medal marks a fairytale end the season for the 30 year old.