Nick Foster in his Formula Ford at Sandown

The 18-year-old driver has signed with Giles Motorsport for his debut in the NZ open-wheel class.

He will begin his campaign with a two-day test at the Manfeild circuit starting today, only his second taste of an open-wheel ‘wings and slicks’ race car after a one-off appearance in the Australian Formula 3 Championship in September at Eastern Creek.

The young driver from Brisbane, Queensland will then make his Toyota Racing Series debut in the series opener at Teretonga Park at Invercargill on January 15-16, followed by the second round at Timaru International Raceway one week later. 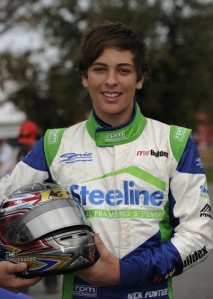 Foster, who finished third in this year’s Australian Formula Ford Championship, said that racing in the Toyota Racing Series would be an enormous challenge.

“The Toyota Racing Series is a really good championship and the last few years have shown that a lot of good guys come out of it and go on to bigger things,” said Foster.

“Securing this drive is another stepping stone in my career and I’m very excited to be doing more driving in wings and slicks open-wheel cars.

“I got a taste of it in a one-off drive in Australian Formula 3 earlier this year and this drive gives me another crack at it.

“I have no experience in the TRS cars entering this test, which makes it hard going up against someone as good as Mitch (Evans). It’s a big learning curve but one I’m looking forward to because this kind of opportunity is really good for my career.

“The Giles team has only been in the series two years and on both occasions they have won the championship, so this is clearly a great gig to get.

“Everyone knows what Mitch is capable of and Nick Cassidy is a really fast young gun from Formula Ford, so we will all be pushing each other pretty hard as team-mates.”

Stephen Giles, Team Principal of Giles Motorsport, said that he looked forward to having Foster in his team.

“In what’s shaping up to be the most competitive field since the Toyota Racing Series began, Giles Motorsport welcomes Nick to the team and is looking forward to working with him over the coming season,” said Giles.

“Although Nick has very limited wings and slicks experience, his results in the Australian Formula Ford Championship this year have shown how quick he is and I’m sure he’ll prove himself to be more than capable of mixing it with the more experienced drivers.”