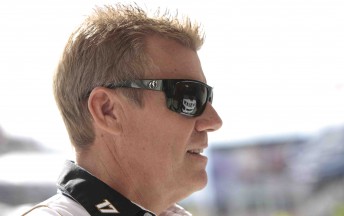 Charlie Schwerkolt should have been celebrating with the rest of the Jim Beam Racing organisation yesterday. Instead, he was in no position to hug and kiss new V8 Supercars Champion James Courtney.

After a bitter business break-up with long-time friend Dick Johnson, and a failed attempt to establish a fourth entry at Ford Performance Racing with James Courtney next year, Schwerkolt has, more or less, left the sport.

All that he is taking with him is ownership of the #18 Racing Entitlements Contract (REC).

Schwerkolt will lease that REC to DJR for the next two seasons, and under the REC rules, will either have to run the entry himself, or sell it, for the 2013 season.

Schwerkolt will not be seen at many V8 Supercars races next year.

In an exclusive video interview with Speedcafe.com.au’s Grant Rowley, Schwerkolt said that the season didn’t end the way he’d imagined.

“Yeah, it’s not exactly the outcome I wanted, but things change,” he said.

“I’m a little bit hurt and burnt by it at the moment.”