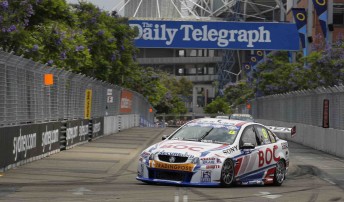 Andrew Jones at the Sydney Telstra 500

Richards was recently diagnosed with stomach cancer and will undergo chemotherapy in the coming weeks.

If the treatment is deemed successful, Richards will need a number of months to properly recover.

With next year’s championship kicking off with a pre-season test at Eastern Creek on January 29, Richards will be unavailable, giving BJR the off-season task of finding a driver for the #8 Team BOC Commodore VE.

Brad Jones said that Richards remains his team’s first driver choice, but until he is deemed fit, a replacement must be found.

“At the moment, we’re looking for someone – in the short term – and it could be for three, six, nine or 12 months,” he told Speedcafe.com.au.

“That’s pretty much the way that we’re looking at it. If we have that attitude, it gives Jason plenty of time to get better, and then we can work out where he is going.

“It’s a project for us after Homebush to work on, but he definitely won’t be starting the season. He’d have to be superman to be healthy enough.”

The remaining seats left in the 2011 V8 Supercars field is limited. The only real opportunities exist in the #8 Team BOC Commodore and the #18 Dick Johnson Racing Falcon.

The drivers in line to fill those vacancies include Steve Richards, David Besnard and James Moffat.

Jones said that at this point, finding a replacement has not been a priority.

“I don’t know if we need a young guy or if we need someone more established,” he said.

“I don’t know yet. We’ll see how the weekend pans out and go from there.

“It’s something that we’re going to have to move on pretty quickly – you need to have your drivers sorted – but at this point in time, it hasn’t been a priority.

“But if Jason is fit, he’s our first pick. He’s about to go through an intense part of his life and we need to give him the space to do that and see how things go.”

Team BOC endurance driver Andrew Jones has substituted for Richards in the past two events at Sandown and Sydney.