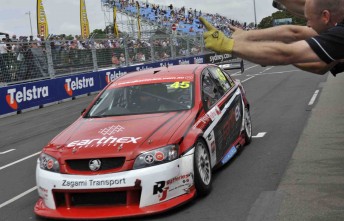 Steve Owen has completed a dominant season in the Fujitsu V8 Supercar Series by winning the final race in Homebush.

The Earthex Racing driver beat home Nick Percat by just under two seconds after pulling off a daring braking move on the Bundaberg Red Commodore at Turn 9 on Lap 4.

Blanchard was knocked straight through the Turn 2/3/4 chicane in the closing stages after David Russell (Team Jayco) made contact with David Besnard (V8 Race Experience) behind. Besnard spun back to ninth, while Russell, who had earlier charged from 18th to 10th on the opening lap, carried on to finish fifth.

David Besnard beat home Shane Price (Drive.com.au) for eighth, while Marcus Zukanovic (Midway Concrete and Garden Supplies) was 10th, despite dropping to 17th courtesy of an off at Turn 1 on Lap 8.

Two Safety Car periods punctuated the race, with the first called on the opening lap due to a collision between Tony Bates (Sports Alive.com.au) and Nathan Vince (Black Track Haulage) on the exit of Turn 1 that saw Bates left stranded against the concrete wall.

Joining Bates and Jilesen on the DNF list were Paul Morris (The Love Machine) and Aaron Russell (ESET Antivirus), who were struck down by a broken alternator and a dropped cylinder respectively.

In addition to the race, round and championship spoils, Owen also recieved $5,000 for wining the 2010 Armor All Pole Position Award.