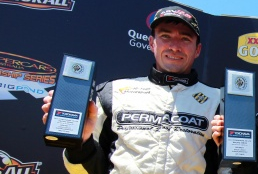 While Johnson, the 2008 champion, entered the weekend with a comfortable points lead over 2009 champion Elsegood, the title race was thrown wide open when Johnson was disqualified from qualifying and Race 1 due to a brake irregularity.

Elsegood (Coopers Clear Ford) took second to Charlie O’Brien (Coombabah Plaza Ford) in both qualifying and Race 1, but could only manage 10th in the reverse top 16 Race 2.

Johnson (Brunel Energy Holden), put in a Herculean Race 2 drive to keep himself in title contention, scything his was from last on the grid to fifth in just 12 laps.

The title was not decided until Race 3 – which was ultimately cut short by two laps due to time constraints.

When the chequred flag fell, Johnson had made his way up to 14th position, while Elsegood again finished second to O’Brien – leaving the former National Rugby League player one place short of back-to-back titles.

Andrew Fisher (Jesus Racing Ford) took third in the championship despite a tough run in Sydney that left him 14th for the weekend.

Asian guest driver Ryo Orime had a less than successful debut on Australian soil – destroying the SS Changi Holden halfway through the first lap of Race 1 – leading to the race being red flagged.