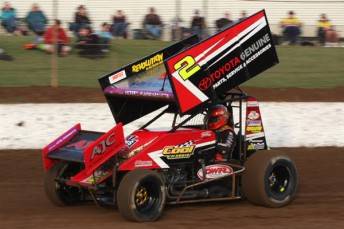 The Krikke Motorsport pilot, who is subbing for defending series champion Brooke Tatnell, led all the way in the 30-lapper to claim victory from fellow front-rower David Murcott and another American Jason Johnson.

Sides qualified ninth fastest before enjoying a strong run during the heat races aboard the Toyota Genuine Parts Cool chassis.  He then secured pole position for the main event after dominating the Silver and Gold Shootouts.

The American was never troubled in the main event with Murcott and the rest of the pack not able to make any serious moves, even on the two restarts, both caused by a spinning Bryan Mann who was sent to the infield after the second misdemeanour.

Sides’ victory means the 37 year-old has now won events in every major sprintcar series in the world including the World of Outlaws, ASCS and National Sprint Tour.

“It just shows how good this team is,” said Sides.

“The car has been fast, we’ve just had to fine tune it a bit for our driving style.

“I have to thank Shane Krikke for giving up this opportunity.”

Sides will be in the car for one more round before Tatnell returns to Australia for round five in Adelaide on Boxing Day.

For the third week in a row Murcott started on the front row, lining up on the outside of Sides after being the polesitter in the earlier rounds.

Fortunately for the driver of the Mainline Dynolog Dynamometers Eagle chassis this time around he converted a good start into a good finish.

Fresh from claiming his second ASCS Championship in America, Jason Johnson jetted into Australia last week to be re-united with the Haynes Motorsport team after substitute Matt Reed in the first two rounds had kept his seat warm for the opening two rounds.

While showing glimpses of speed Johnson lamented ‘missing’ the set-up after the track was freshly prepared for the main event.

Series leader Robbie Farr could only manage 13th in the main event.