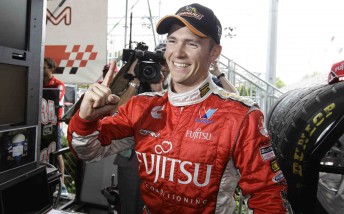 Lee Holdsworth has taken his second pole position in two days at the Sydney Telstra 500 ahead of the 26th and final race of the 2010 V8 Supercars Championship Series this afternoon.

Holdsworth (Fujitsu Racing) set a 1:28.80s lap with less than three minutes remaining to take his fourth career pole – three of which have come at the Sydney Olympic Park street circuit.

In a repeat of yesterday, Jamie Whincup (TeamVodafone) put on a wild display throughout the 20 minute session.

Offs at Turn 8 and Turn 9 early in the session left Whincup slowest when a red flag appeared after six minutes – called due to Paul Dumbrell (The Bottle-O Racing) pushing a tyre bundle onto the circuit at Turn 7.

Whincup moved into the top spot with less than four minutes remaining, but brushing the apex and exit walls at Turn 12 ruined his final attempt to reclaim the position from Holdsworth as the chequered flag fell.

The HRT driver ended the session with damage to the front right corner of his car after collecting the Turn 8 tyre barrier.

James Courtney (Jim Beam Racing), who needs just a 22nd place finish to seal the championship today, could manage only 12th in the session after his final two attempts ended down the Turn 9 escape road.

Andrew Jones (Team BOC) brought out the session’s second red flag when he collected the Turn 11 tyre barrier halfway through the session.

The Team BOC Commodore will start the 250km race from 28th.