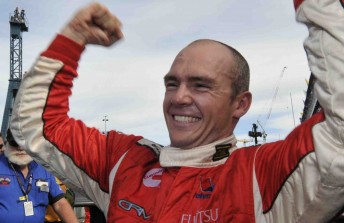 Lee Holdsworth after winning Race 26 at the Sydney Telstra 500

Lee Holdsworth stopped short of declaring himself a 2011 V8 Supercar Championship Series contender after winning the 26th and final race of 2010.

The Fujitsu Racing driver was the pace setter all weekend on the streets of Sydney Olympic Park, taking two pole positions and the second race win of his career.

Although the win came as a result of passing Shane van Gisbergen’s out-of-fuel SP Tools Falcon on the final lap, Holdsworth was in no doubt that it was a genuine victory.

“I really feel that we deserve this one,” he said.

“Our team have been pushing really hard this weekend and I’ve been driving the car on the edge to try and get up there, so to get two pole positions and have a perfect day today with a race win is pretty special.

“I really felt that one was coming for a long time because we missed out (on a win) last year.”

Despite the late season form, Holdsworth does not believe that he will be challenging for the 2011 Drivers’ crown.

“You’ve got to be winning races more often than what we’re doing at the moment to be championship contenders, but I think we’re certainly on the right path to get the team to that next stage within a couple of years,” he said.

“This back half of the year has been brilliant for us – we’ve shown really good car speed.

“We haven’t quite put it all together with pitstops, and I’ve made a few mistakes, so it’s cost us some results that would have been quite strong.

“But to actually bank a win at the end of the season is brilliant and gives us a really good platform to go on next year, we can keep building from here.”

“A big congratulations to James. I think he’s driven a brilliant year a very smart year and he deserves this one,” he said.