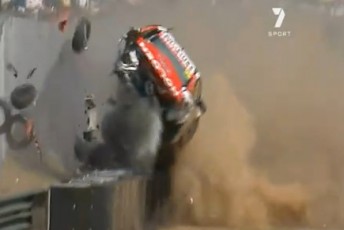 Michael Caruso has been charged with reckless driving after his high-speed incident with Will Davison at Sandown Raceway two weeks ago.

The Fujitsu Racing driver has been fined $3000, suspended until the end of next year, plus the loss of 80 championship points.

The incident occurred in Sunday’s race when Caruso tagged the back of Davison’s Toll Holden Racing Team Commodore VE, sending both cars into the tyre wall. Davison’s car spectacularly leaped in the air.

Caruso told Speedcafe.com.au that after such a big accident, he was glad that both drivers walked away unscathed.

“The most important thing about what happened was that both myself and Will walked away OK,” Caruso said.

“That was the first thing that I checked was to make sure he was OK. Will and I get along fine. I wouldn’t want to do anything like that to him or anyone else.”

The loss of 80 points drops Caruso outside of the top 10 in the championship – the first time since the start of this season.

He needs to score more than eight points over Russell Ingall today at the Sydney Telstra 500 to move back into the top 10.

“It’s not the outcome we wanted,” he said.

“We’ve got no problem with racing people to jump in the championship, and that’s what it is going to come down to. I said to my engineer before that this prepares us for a championship battle in the future – trying to beat someone to jump ahead.

“It would be good to finish in the top 10 in the championship this season.”