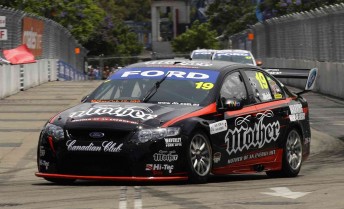 Jonathon Webb has won an amazing V8 Supercars race at the Sydney Telstra 500 today, while James Courtney has moved into the box seat in the championship race.

The Mother-backed driver took his first V8 win amid a staggering amount of drama at the Sydney Olympic Park street track.

While Webb took a surprise win, the race for the V8 title between the championship contenders took a major hit on lap 60 when leader Mark Winterbottom, James Courtney and Jamie Whincup (among others) hit the turn five wall in wet conditions.

The crash ended Winterbottom’s race and championship chance, while Courtney and Whincup’s crew worked overtime to get the cars back on the track to score title points.

Courtney ended up 15th, while Whincup’s team got the car onto the back of the track, but he only completed an outlap at the end and has been classified as a non-finisher. The gap in the championship between Courtney and Whincup, as it stands, is 113 points.