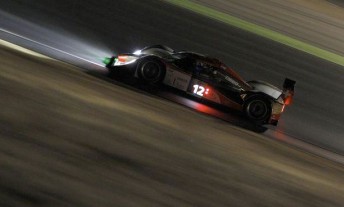 Rebellion will switch from Judd to Toyota power in 2011

The Cologne, Germany, based motorsport arm of the Japanese auto giant has signed an exclusive engine supply contract with Rebellion, which will see Toyota represented at the Le Mans 24 Hours in an official capacity for the first time since 1999.

Toyota Motorsport President Yoshiaki Kinoshita said he is excited about the deal after several track tests of the Lola-Toyota combination were completed in October.

“Toyota Motorsport has recent experience of engine supply partnerships from our Formula One days so we are drawing on that to deliver a reliable and competitive engine,” he said.

“We are looking forward to working with REBELLION Racing on this exciting project and it was very pleasing to see this engine running in a car for the first time, particularly because the performance, as well as the reliability, was very encouraging.”

The team finished second in the 2010 Le Mans Series LMP1 Manufacturers Championship after visiting the podium three times during the season.

Team principal and founder Hugh Hayden passed away in October last year after suffering a heart attack during a post-season team building event.

Alexandre Pesci, who began a partnership with Hayden in 2008, has now assumed team principal duties, and expressed his pride at partnering with Toyota.

“This agreement is the cornerstone of Rebellion’s challenge for the forthcoming season,” he said.

“Toyota is an impressive and remarkable industrial giant, we are proud to have been selected by Toyota Motorsport as their partner in this project.

“It means a lot for our team to have secured their support in our efforts to target the victory.”

Details of the engine itself are yet to be revealed.