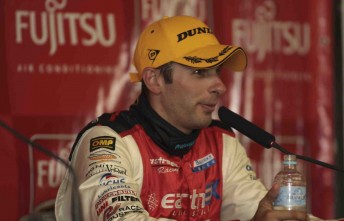 Steve Owen has taken his second Fujitsu V8 Supercar Series crown by winning the opening race of the final round on the streets of Sydney Olympic Park.

The Earthex Racing driver dominated the 17 lap affair, pulling an advantage of more than three seconds over pursuer Nick Percat (Bundaberg Red Racing) before and after a mid-race Safety Car.

Percat held off a determined James Moffat (Norton 360 Ford Rising Stars), who scythed his way from 13th on the grid to run third as early as Lap 4.

Blanchard was not the only victim of the opening lap mayhem, with Bathurst round winner David Russell (Team Jayco) suffering considerable damage due to contact with Percat and then the pit-wall soon after the start.

In a race of attrition, front row starter Scott McLaughlin (Fujitsu Racing) was running third on Lap 5 when he retired with a broken shock absorber.

Drew Russell (ESET Antivirus) also featured in the top five before joining McLaughlin in the pits – his Falcon with a broken watts linkage after contact with the exit wall at Turn 1.

Taz Douglas (Fastaz Motorsport) brought out the race’s one and only Safety Car on Lap 10, clipping the wall at the Turn 5 sweeper while running competitively in fourth.

The final race of the 2010 Fujitsu V8 Supercar Series will be held tomorrow at 12:25 local time.