Track changes made ahead of Sydney 500

Track changes made ahead of Sydney 500 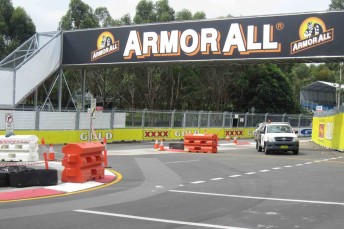 Key among the changes is a revised Turn 2/3/4 chicane, which is set to lower lap times across all classes.

The chicane’s right hander, referred to as Turn 3, has been dragged two metres inwards, and now features a flat apex kerb. The raised ‘Hidden Valley’ style kerbing remains at Turns 2 and 4.

In order to discourage drivers from taking advantage of the lower kerb, an apex tyre bundle has been anchored into the ground at Turn 3.

“Turn 3 last year was one of the worst corners on the track, because it had a high kerb, was very tight, and quite bumpy,” he said.

“Now you should be able to run over that kerb, and it should be second gear rather than first – so it’ll certainly be quicker.

“It should be a better passing opportunity as well. The tyre bundle allows you to dive up the inside, make a mistake, and carry on.”

Those undertaking track inspections yesterday also noted that the median strips taken out for the race have been replaced with concrete this year, instead of asphalt.

Trackbond has also been applied to the circuit at several points, in order to prevent the surface breakup that occurred during last year’s event.

“It probably will make a bit of difference,” said Winterbottom of the additional concrete.

“Last year the one on the main straight was concrete, but the ones over the back weren’t.

“It looks like exactly the same surface to what we had on the Gold Coast. That was really grippy and didn’t break up, so I think it’ll be ok.

“The only issue that I can see is that they’ve joined the gaps (between the tarmac and concrete) with sand and resin, and I don’t know how that will hold up.

“That’ll be the bit that’ll break, rather than the concrete, and if that breaks, it’ll just get worse and worse. So it’ll be worth keeping an eye on that.”