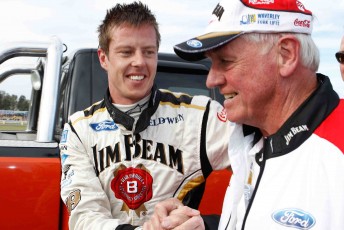 Dick Johnson says that if his team can win this year’s V8 Supercars title, it would be as significant to him as his first Australian Touring Car Championship in 1981.

On that occasion, Johnson raced tooth-and-nail with Peter Brock to win the Touring Car crown.

Nearly 30 years on, Johnson has been involved in another type of tooth-and-nail event this year – a fight to keep his race team on the track.

While it appears that DJR will continue into 2011 as a two-car team (CLICK HERE for Speedcafe.com.au’s story yesterday), Johnson says that if James Courtney can wrap up the crown at the Sydney Telstra 500, it will be as big as his first triumph.

After a difficult year, he says that his team has blocked out the off-track issues and is focusing on wrapping up the crown.

“We are really focused on this weekend, and I know James and the whole team are,” he said.

“It would be a real feather in the team’s cap to win seven touring car championships.

“James did a fantastic job here in Sydney last year, and there’s no reason why we can’t repeat it this year. A statistician told me that if Jamie (Whincup) wins both races, James has to finish fourth or better to win. That’s all we need.

“Jack Brabham once said, it’s not the margin you have to win by, you’ve just got to win.”