A distinctive yellow Bisley banner will appear on the top of the windscreens on the cars of Todd and Rick Kelly, starting this weekend.

The former Bathurst-winning brothers launched the partnership in pitlane at the Sydney Telstra 500 this morning.

Bisley ambassador and star of Channel 9’s The Block, Scott Cam, was also on hand, and said he was excited by the news. 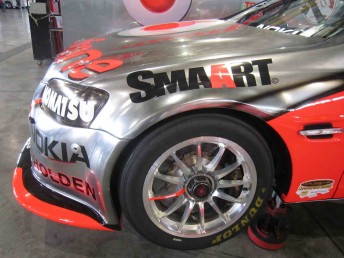 SMAART features on the front guards of the TeamVodafone Commodores

“We’re really looking forward to being involved with the Kellys, traveling to most of the races over the next three years and getting involved.”

Cam climbed aboard the Jack Daniel’s Commodore for a look inside the cockpit, but found it an uncomfortable fit.

“I thought possibly that the car would not get out onto the track today, as I was never going to get out of it,” he joked.

“It’s a pretty tight squeeze in there, and I’m not as flexible as I used to be.

“I’ve done a couple of hot laps in the cars before. They’re so noisy and bumpy, but I loved it.” Todd Kelly’s car will also carry James Hardie branding this weekend, with the former Bathurst 1000 sponsor featuring on the headlights of the No. #7.

In other sponsorship news, SMAART Recruitment signage will feature on the front guards of the two TeamVodafone Commodores in Homebush, as part of Vodafone’s year-long small business promotion competition.

Other different stickers you will see on V8 Supercars this weekend is the event sponsor sticker that is a compulsory item on the doors of each car. Instead of the traditional ‘Sydney Telstra 500’ sticker, V8 Supercars has elected to use the space to promote a Ford versus Holden popularity content. Members of the public has been invited to vote for their favourite manufacturer by texting. Telstra will donate 10c from every text to the Surf Lifesaving Club of Australia.