The top drivers from today’s Sydney Telstra 500 practice have praised the changes made to the circuit for this year’s race.

Fastest man Jason Bright said that the increased level of grip increased his enjoyment of the Sydney Olympic Park layout.

“The track’s got a lot of grip, you can really attack it this year,” said Bright at the official Friday press conference.

“Last year the kerbs made the first chicane feel very unco-ordinated everytime you went through there. 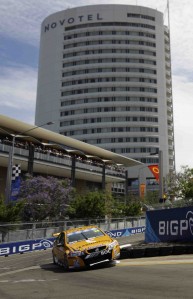 “This year you can really attack those corners, and when you can attack a street circuit like this and get it right, it’s very satisfying.”

Lee Holdsworth, who looked a likely winner in both races last year before collecting the tyre barriers at Turn 3 (Saturday) and Turn 8 (Sunday), concurred.

“When you put a lap together here it is very rewarding,” he said.

“The challenging tracks are more rewarding the more you attack.

“You really attack the kerbs, attack the braking zones, and push it against the walls.

“Hopefully this year I don’t push it to far like I did last year!”

Holdsworth also said the resurfacing should prevent the track breakup that led to him crashing out of last year’s event.

“I think the marterial that they’ve laid down is similar to what they had at the Gold Coast.

“That didn’t brake up, and it was quite grippy, so I don’t think that’ll be a problem.

“Last year when the track was braking up, you had to adjust your lines every lap to make sure you weren’t running on that same line were it was braking up.

“You’d change your line so much that you’d end up using kerbs on corners that you usually don’t.

“Hopefully we don’t have to do that this year – it looks pretty promising that we won’t.”