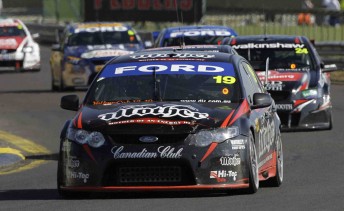 Dick Johnson Racing’s Jonathon Webb is set to break a significant record in the V8 Supercars Championship Series this weekend at the Sydney Telstra 500.

Webb will eclipse the benchmark set by Mark Winterbottom for the best season finish by a reigning development series champion in their first full year in the main series.

Webb, currently 13th in the V8 Championship Series, will out-do Winterbottom’s 18th overall finish in the 2004 title after he won the development series in 2003.

The other feat that Webb could achieve this weekend is that, so far, he has a 100 percent finishing record this year.

Webb has finished inside the top 10 on six occasions, with a best result of sixth at the L&H 500 at Phillip Island with co-driver David Russell.

Webb says that his results this year smash his modest pre-season goals.

“My goals this year were conservative and realistic, so I’m very pleased to have exceeded expectations by beating Frosty’s 2004 benchmark, ” said Webb.

“Six top 10 have certainly helped that result and I look forward to going even better in 2011.

“To finish every lap of every race is good for me and my team, good for my sponsors and good for the sport. Irrespective of what happens this weekend at Homebush I’ve very proud of this achievement.”

Webb will leave the Dick Johnson Racing stables at the end of this season, setting up his own one-car team.