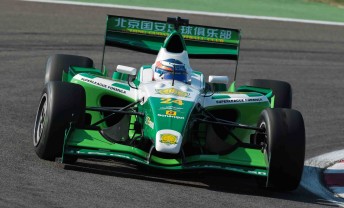 Superleague Formula by Sonangol has revealed that it is planning to expand its series in 2011, targeting races in the Middle East, Australia and the Americas.

The 2010 saw the football-themed series hold events outside Europe for the first time with a double-header in China and, after the success of the races at the Ordos International Circuit and Beijing International Street Circuit, further flyaway rounds are planned for Superleague Formula’s fourth season.

While a return to China for at least two races seems certain, talks are also being held with race promoters and circuits elsewhere in Asia, while new markets are also being targeted.

Brazil, which boasts two football clubs (Corinthians and Flamengo) in the series, is just one of several countries in South and Central America eager to see the series’ V12-powered, 750bhp single-seater cars racing on their soil. Talks have also been held with at least one circuit in the USA.

Next year’s 12-round calendar will be announced shortly.

“2010 was a hugely successful season for Superleague Formula,” he said.

“Not only did we expand our calendar to 12 rounds, but we also broke new ground with our hugely successful trips to two brand new venues in China.

“In addition the title race could hardly have been more exciting, going down to the last of 36 races. We want to build on that success for next season and the huge amount of interest we’ve received from all four corners of the globe points to another superb year.”

Australian driver John Martin has competed in the series for the past two season.