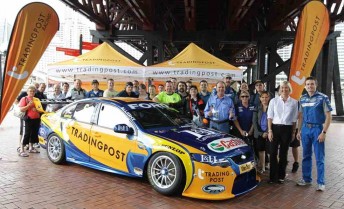 Ford Performance Racing has unveiled the new colour scheme of its #6 entry for the 2011 season.

The second FPR Falcon will be sponsored by Trading Post for the next two years and will be known as the ‘Trading Post Ford Performance Racing’ entry.

Trading Post ambassador Brooke Hanson was on hand to help reveal the new livery at Darling Harbour, Sydney this morning.

Team principal Tim Edwards said that the team’s strong end to the 2010 season will mean a big push at the title next year. 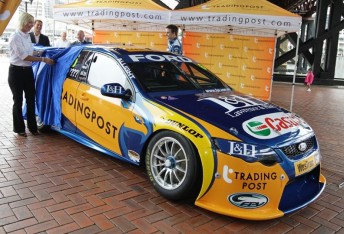 Brooke Hansen looks surprised to see the question marks on the window. Who could the driver be?

“FPR has enjoyed a strong 2010 season which gives us a great foundation to build on for next year and with the added support of Trading Post, we can now plan for an all-out assault on the 2011 championship.”

The Falcon will be driven by Will Davison, who will leave the Toll Holden Racing Team at the end of this weekend’s Sydney Telstra 500. The Victorian will be officially confirmed in the new year.

Davison will replace Steven Richards, who has been with the team since 2007.

FPR also used the launch of its new sponsor to announce a new three-year deal with Ford to continue as the official factory back team.