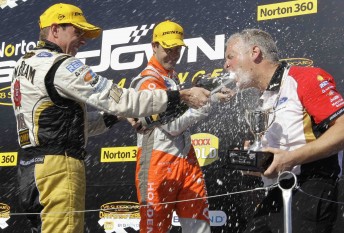 James Courtney and Jamie Whincup gives Adrian Burgess a taste of champagne at Sandown. Next year, Whincup will be hoping to give Burgess even more ...

Amid the off-track drama that has unfolded at the Queensland-based team, Burgess has kept his Jim Beam crew focused on the task of securing James Courtney and the team its first V8 championship in 15 years.

If Courtney does maintain his points advantage over Jamie Whincup and win the V8 title, it will go down as one of the great series wins, considering the team’s difficult ownership situation between Johnson and co-owner Charlie Schwerkolt.

While it appears that the pair will soon confirm the future direction of the team moving forward, DJR Sporting Director Burgess was one of the team’s first casualties, announcing recently that he would leave the squad at the end of the year to take up the team management position at TeamVodafone.

He says he wants to leave DJR with #1 on his resume.

“”We have just tried to keep the guys as motivated as possible,” said Burgess.

“There is a good spirit within the team and we have not tried to be too clever – it’s about getting the basics right.

“Dick and Charlie are not involved directly with the boys downstairs and my job has been to keep their eye on the prize.

“Sure, I have made my decision about where I will be next season, but I want to walk out of here with the #1 on my back.

“Winning the title would be monumental – certainly a highlight of my time in the sport.”