Richards: The last week has been a blur

Richards: The last week has been a blur 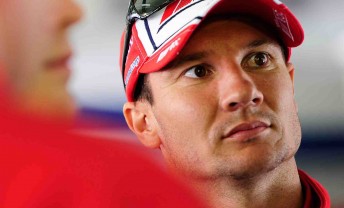 Ill V8 Supercars driver Jason Richards has spoken publicly for the first time since his operation to remove a lump from his abdomen last week.

The Kiwi V8 star, who is still in hospital recovering from two operations, posted on his Facebook account, stating that he now in recovery mode and preparing for his next challenges.

“I’m back and in an undrugged state, first time in days,” he said.

“The last week is all a bit of a blur, considering I was asleep for most of it. I have a team of champions working on this and they have achieved some pretty cool stuff.

“I’m speeding through the surgery recovery reaching milestones everyday. It’s weird not having much contact with the outside world and I don’t rate being connected to so many machines!

“I’ve experienced both the effects of morphine … the pain stopper and the freaky trippy moments. I’ll stick to motor racing for my adrenalin rush!”

Richards made a special note to his many well-wishers.

“Thanks again everyone for the wealth of support,” he said.

“I’m looking forward to getting out of hospital and heading home, especially as Sienna (Richards’ daughter) thinks I look funny in a dress! (hospital gown).

“Now it’s time to prepare myself for the second phase.”