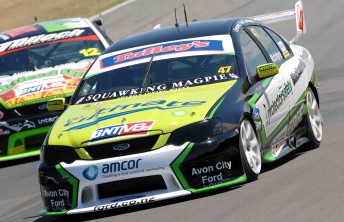 John McIntyre (Amcor Falcon) was declared the winner of Round 2 of the BNT V8s Championship held at Powerbuilt Tools Raceway at Ruapuna near Christchurch, however, a post-race protest has seen him disqualified from Race 1.

McIntyre finished second in the race but a successful protest was made over contact with the rear of Andy Knight’s car. The clash resulted in Knight spinning out of contention.

McIntyre’s team have lodged an appeal to the decision which will be heard before the end of December.

The three races produced three different winners, with Baird, McIntyre and town driver Andy Knight (Century Batteries Falcon) taking the spoils. Fogg’s consistent results over the weekend allowed him to maintain his points lead in the series ahead of McIntyre and Baird.

Fogg was pleased to head the championship at the early stage of the season.

“The top of the points table is a good place to start the new year but it will get more difficult from here on,” he said.

“We have a few more tweaks to do to the car and maybe the driver so we are looking towards Teretonga already.”

The next round of the BNT V8s Championship will be held at Teretonga Park near Invercargill on January 14-15 next year.