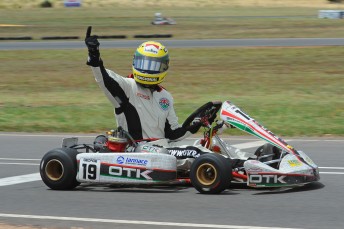 Lining up alongside the best young drivers in the country, including reigning national champion Joseph Mawson, in the Junior Clubman category the 14 year-old took advantage of every opportunity over the closing laps of the championship final to charge his way from ninth place to victory over the final two laps.

In one of the toughest and closest races seen for many years, the top ten positions were exchanged corner after corner with Mawson, Cairns youngster Aidan Wright along with South Australian hopefuls Todd Hazelwood and Simon Hodge were battling for the win.

With a lap and a half remaining Anton DePasquale, who had charged from 20th on the grid, spun out of third place after coming together with Wright, then Mawson and Hodge came together two corners from home while squabbling for the race lead.

As the leaders fell away Gutierrez, who’s racing idol is the late, great, Ayrton Senna, squeezed his way through to emerge from the carnage as the race leader and steal an emotional victory.

“It’s just an amazing feeling, I could see karts going in all directions as they were racing pretty hard near the front of the field,” said Gutierrez, who’s middle name is Nigel after the former World Formula One Champion Nigel Mansell.

“This is my first state championship, I’ve been racing for seven years and been trying so hard to get the win. Now I can say that I’m a state champion – it’s awesome.

“I had a lot of luck on my side, there was a couple of times there when I thought I was going to be taken out but somehow I snuck my way through into the lead with half a lap remaining.

“Coming out of the final corner I looked back and saw that I had a few kart lengths lead and I knew the win was mine.”

Remo Luciani won his 52nd state title when he took out the Clubman Over 40s category, he also finished second behind Shay Mayes on Clubman Heavy while Shayne Piper made the most of his opportunities to win Clubman Light.