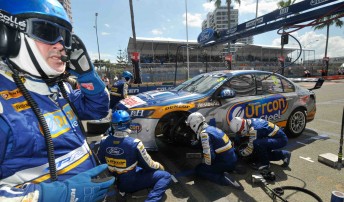 In preparation for an expected expansion from three to four cars next season, the factory Ford team is on a recruitment drive, searching for mechanics, engineers and other staffers to join the resurgent blue oval squad.

The first major acquisition that FPR has scored is the services of Matthew ‘Techo’ Nilsson, who will assume a newly-created role as engineering manager.

Nilsson new role will see him be the conduit between drivers, individual car engineers and mechanics of FPR’s entries. He will not directly engineer a race car. 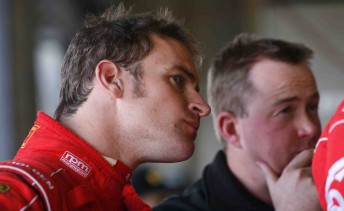 Will Davison and Matthew ‘Techo’ Nilsson

Nilsson’s appointment will see him leave Walkinshaw Racing at the end of this season. For most of his time with the Holden team, the renowned engineer was the brains behind Garth Tander’s efforts in Toll HSV Dealer Team and Toll Holden Racing Team Commodores. The pair’s biggest success came in 2007 when Tander’s won the V8 title.

This year, Nilsson was switched onto Will Davison’s #22 Toll HRT car and coincidentally, Davison will also join FPR next year …

“What we’re doing at the moment is having a restructure of the business,” he said. “We’ve already got a couple of key people appointed, and those changes have been in the works for a while. And irrespective of whether we’re running three, five or 25 cars next year, the restructure is happening.

“We’ve recently created a new position of ‘Engineering Manager.’ We’ve filled that position and Matt Nilsson will start with us very soon. There’s a few other key appointments that we’re looking to fill.

“I’m about to sit down with the people here at FPR to discuss the restructure, roles and responsibilities.”

These changes come at a crucial time for the Ford team. Since the Gold Coast street race, FPR has proved to be arguably the team with the fastest V8 Supercars.

At the Gold Coast, Mark Winterbottom (Orrcon Steel) and Steven Richards (Dunlop Super Dealers) locked out the front-row before Winterbottom took a race win at Symmons Plains. At Sandown last week, Paul Dumbrell (The Bottle-O) took a pole and won his first ever race.

While FPR has been fast of late, they have also made “silly” mistakes – including a major pit stop bungle on the Gold Coast. These type of errors is something that Edwards wants to completely removed from his team’s game.

“We copped plenty of flack for some of the silly mistakes that we have made,” he said.

“We’ve now demonstrated that we have fast cars, and that’s the hard bit – and some of the silly things that were getting wrong were the easy bits. Part of that is down to some of the structures, processes and procedures that we’ve had in place internally – and that’s what we’re looking to address.”