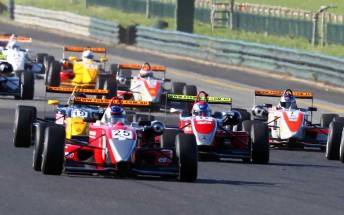 The start of the F3 race at Sandown recently

The CAMS Board has rejected a proposal to amend the award criteria for the CAMS Gold Star.

The Gold Star is currently awarded to the winner of the Australian Formula 3 Championship, however, the Australian Motor Racing Commission recently proposed to have F3 stripped of its Gold Star rights, proposing that it should be given to the driver that the CAMS Board considers to be the highest achieving Australian open wheel driver during a calendar year.

The AMRC proposed that the CAMS Board amend the current rule book to the following;

“The CAMS Gold Star will be awarded annually to the Australian (defined as the holder of an Australian passport) open wheel racing driver which the CAMS Board considers to be the most worthy recipient. Any such driver would normally be competing in open wheel racing within  Australia but it may alternatively be awarded to a driver who achieves outstanding results in International open wheel competition,” said the AMRC’s submission.

According to a response statement from CAMS, the board discussed the subjective criteria, the history and heritage behind the award, along with the reputation of past winners. The Board resolved to instruct the AMRC to reconsider the proposal to ensure the status of the best driver in Australia’s premier category is maintained.

Since 2005, Australian F3 has been the holder of the award, with the winners including Aaron Caratti, Ben Clucas, Tim Macrow, James Winslow, Joey Foster and Ben Barker.

At this stage, Australian Formula 3 and CAMS do not have an agreement to continue to award the Gold Star for next year and beyond. F3 is currently finalising its 2011 calandar, which may include some significant additions, including V8 Supercars events. Formula 3 administrators hope that this will allow it to retain its Gold Star status.

The CAMS Board also stated that the Gold Star award could be shelved if the criteria for its awarding does not satisfies its objectives.